If you’re a new parent, then you’re probably already familiar with the many challenges that come with caring for a premature baby in the NICU (Neonatal Intensive Care Unit). Neonatal jaundice is one of those challenges. When you see your baby’s skin turn yellow, it’s alarming!

At least for my husband, Dave, and I, that’s how we felt. Both our mono mono twin girls, Lua and Lily Mae, were born preemie at 27 weeks and BOTH had neonatal jaundice. While it’s common and usually harmless, it can be a bit confusing and even overwhelming to deal with.

We will cover these commonly asked questions and more. So let’s get to it. Here’s everything you need to know about neonatal jaundice.

What is Neonatal Jaundice?

Neonatal jaundice occurs when an infant’s skin and the whites of the eyes turn yellow within the first few days of life. This happens because of an increased blood pigment called bilirubin, which settles in the skin. In most cases, neonatal jaundice is a normal process that occurs in about 3 in 5 babies (60 percent).

Bilirubin is a pigment that is produced when red blood cells break down.

In premature babies, the liver is not yet fully developed and cannot process bilirubin as efficiently as an adult liver can. As a result, bilirubin builds up in the blood and settles in the skin, causing a yellowish appearance.

In most cases, it’s harmless and will resolve by exposing the baby to special lights (phototherapy or bili lights). For full-term newborns, jaundice typically resolves on its own within the first couple of weeks of life with no treatment needed.

In the NICU, neonatal jaundice typically requires medical intervention by exposing the preemie to special lights to help break down bilirubin in the blood. It’s a blue light that shines on the baby’s skin. This special light reduces elevated levels of bilirubin which passes through the urine or stool.

Both our twin girls had bili lights placed on them.

We called it “getting their tan on”. 🙂

We were told by our nurses and doctors this is very common among preemies in the NICU and most may need bili lights at some point.

Typically, a baby is placed under this light for 1 to 2 days. Lua and Lily Mae had bili lights off and on for the first several weeks of life after they were born prematurely.

The most obvious symptom of neonatal jaundice is the yellowing of the skin and the whites of the eyes. Oftentimes, neonatal jaundice is first seen on the face, then on other parts of the body such as the chest and legs. In some cases, urine may appear dark brown or tea-colored due to high bilirubin levels in the bloodstream.

If you have a preemie versus a full-term newborn the symptoms may look different.

A blood test is usually done to determine the amount of bilirubin in the blood. If the levels are high, bili lights will be placed on the infant to lower bilirubin levels.

For A Full-Term Newborn

The primary symptom is usually the yellowing of the skin, but other symptoms may include:

However, if your baby seems unusually sleepy or uninterested in feeding, this could be a sign that bilirubin levels are high and you should seek medical attention immediately.
Untreated severe jaundice can lead to seizures, brain damage, or even death. Thankfully, this is very rare with early detection and treatment.

Don’t hesitate to contact your pediatrician if you suspect your infant to have jaundice so they can perform a physical examination and order any necessary tests such as a CBC (complete blood count) or a bilirubin level test.

Several things that may cause neonatal jaundice could include:

This is the most common cause of neonatal jaundice and usually happens when a premature infant’s liver is not yet fully developed and unable to process Bilirubin effectively.

This was the reason why our twin girls developed neonatal jaundice.

After they were born at 27 weeks, each of our girls was treated. They needed their bili lights off and on up until they were about 32 weeks. Why? After treatment for 1 to 2 days, their bilirubin levels would be good. Then, due to the prematurity of their liver function, their levels would go high again.

Do not be alarmed if your preemie is treated for neonatal jaundice off and on in the NICU. Especially if they were born early. It is common and usually treatable without any worry.

This can happen when an infant has a condition known as hemolytic disease, which causes their red blood cells to break down at a faster rate than normal.

In some cases, neonatal jaundice may be caused by a reaction to certain compounds in breast milk. This usually goes away on its own after a few weeks.

Blood Type Incompatibility Between The Mother and Child

In most cases, treatment for neonatal jaundice in newborns is not necessary as it will go away on its own within 2-3 weeks. However, if bilirubin levels become too high, your baby may need to be treated with phototherapy (light therapy aka “bili lights”) or exchange transfusions. These treatments help reduce bilirubin levels and should only be performed under the care of a medical professional.

To Wrap It Up

Most of the time, there’s no need to worry as neonatal jaundice is common and usually harmless in newborns.

So if your infant has jaundice, don’t panic! Most of the time it will clear up on its own within a few weeks with full-term newborns and with premature infants in the NICU, neonatal jaundice is usually very treatable and closely watched.

If you’re concerned about your baby’s jaundice or it doesn’t seem to be improving, be sure to talk to your pediatrician or NICU medical team. They will be able to advise you on whether there’s cause for concern or if the treatment might be necessary.

Until the next post, I’m sending you all the positive parent vibes!

Thank you for being here today!

Do you have anything to add or tips to share about neonatal jaundice? Let us know in the comments below. 🙂

Was this post helpful? If so, I’d love your support by sharing it!

Lindsey is the proud mom of two little miracles, Mono Mono twin girls, and one AMAZING older bro! She is the founder and content creator of Mono Mono Twins, the blog Intensive Therapy for Kids, and Co-Founder of The LENN Foundation 501(c)(3) which helps children with cerebral palsy (like her sweet nephew, Lenny) receive grants for intensive therapies to thrive. ♥

Disclaimer: This post may contain affiliate links for your convenience. I only recommend deals or items I love because I think you might like them too! With my affiliate relationships, I may earn a small commission at no additional cost to you. Thanks so much for supporting Mono Mono Twins!

Having a baby is an amazing time filled with lots of firsts. From that very first cry to those first steps, every milestone is so special. But knowing what developmental milestone’s in a… 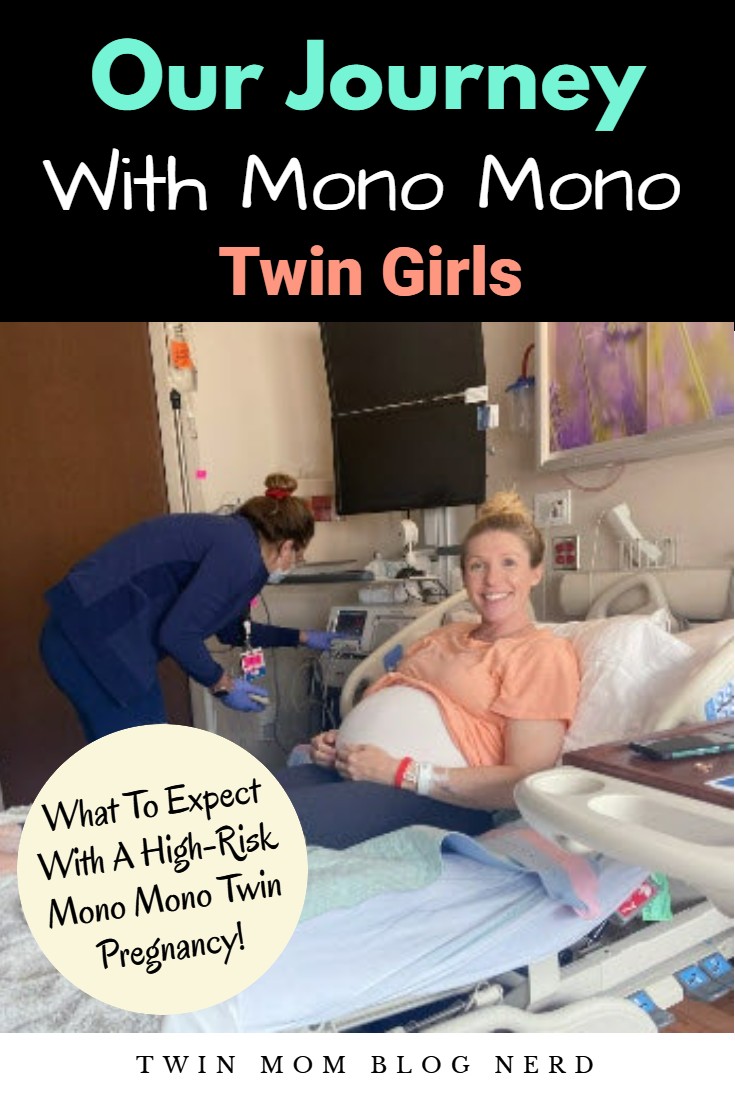 If you are an expectant parent, twins are often a happy surprise. But when you learn that your twins are mono mono—or sharing the same amniotic sac and placenta—the news can be both… What are the best organic diapers to get?  As a new parent to twins, I asked myself this question before researching most of the organic diaper brands on the market. What I learned…

Newborn sleep noises can be pretty surprising – and sometimes even alarming. When we brought our twin girls home from the NICU (Neonatal Intensive Care Unit), that first night, my hubs and I… 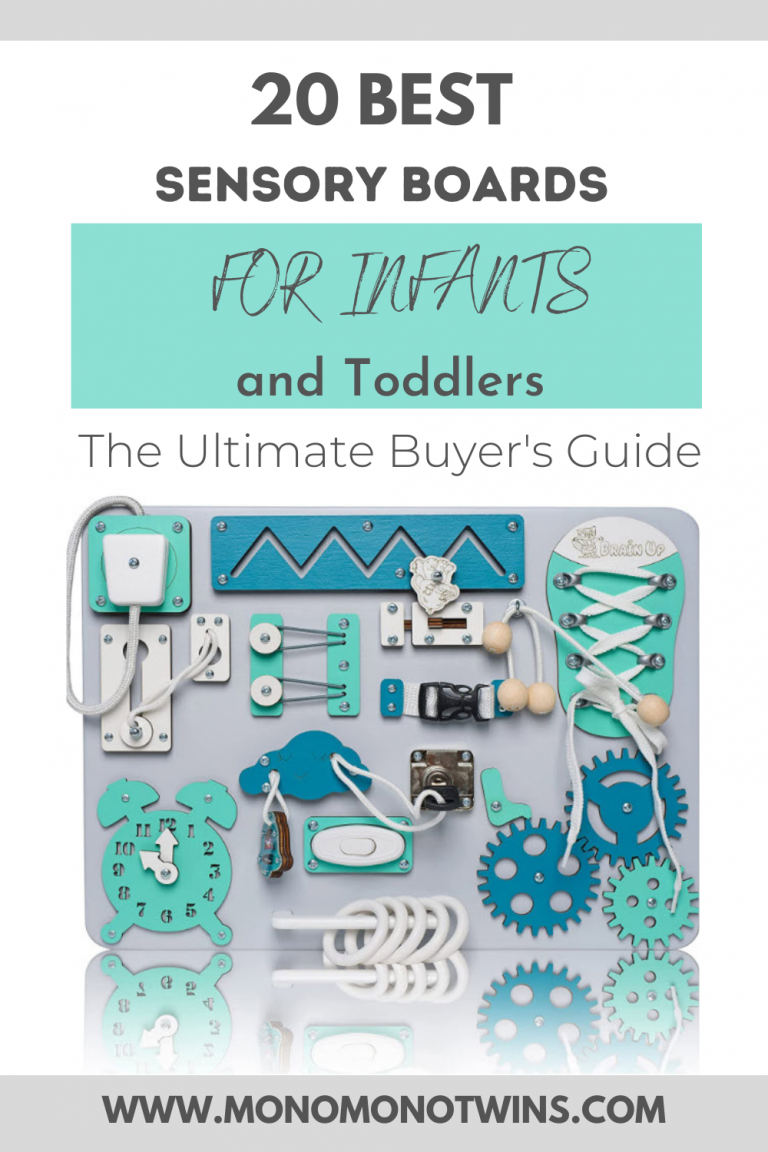 Sensory boards for infants and toddlers encourage the stimulation of their main senses like touch, sound, and sight. Plus, it is an entertaining activity to do! As a parent, we know that finding… 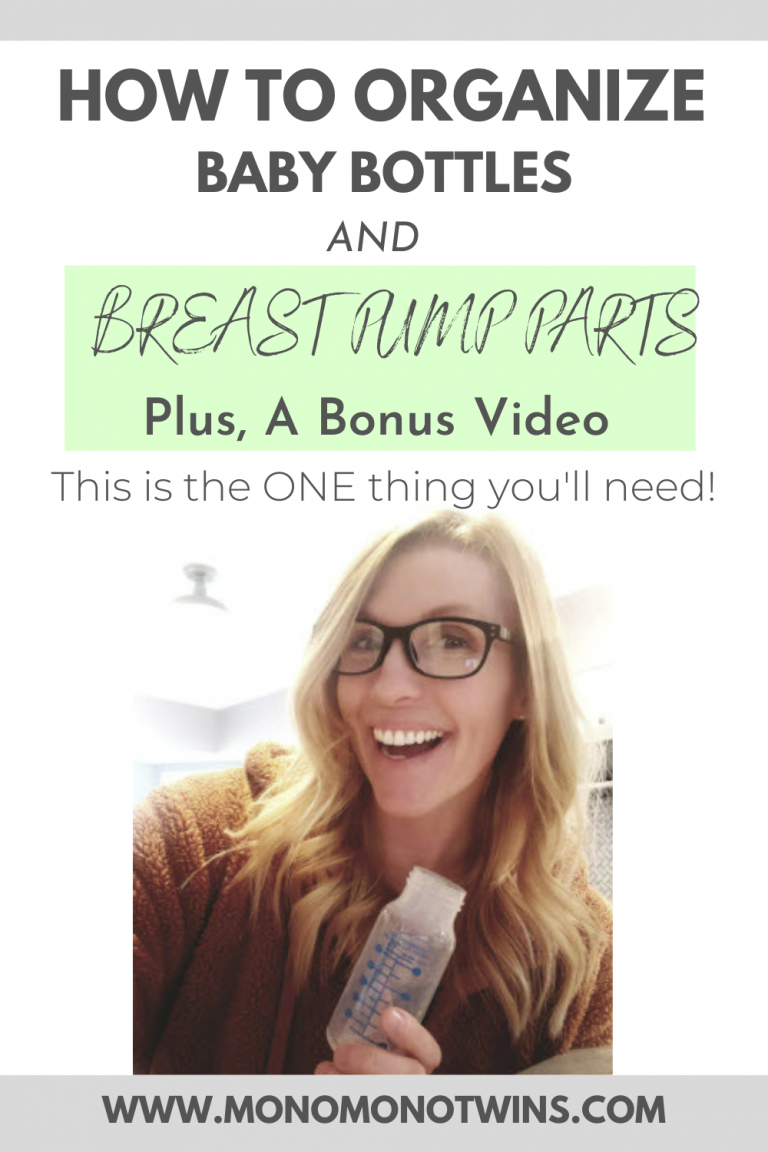 If your baby bottles or breast pump parts have overtaken your kitchen…I FEEL you. I’ll show you how to get this situation under control without breaking the bank. So let’s get to it…here…